Is this guy in your organisation?

23 Apr Is this guy in your organisation? 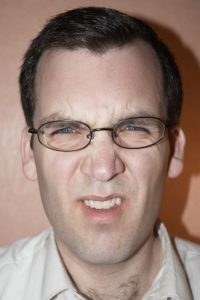 This blog is a follow up to the last one, “Do you know this person?” about Win-at-all-costs-Wendy. Wendy is a case study from the international best-seller, Emotional Judo®: Communication Skills to Handle Difficult Conversations and Boost Emotional Intelligence. Over a series of blogs, I am going to expose a number of ‘challenging’ behaviors/temperaments in the workplace, just to show how Emotional Judo® can help you manage these individuals.

Phil was an IT consultant who wanted to be liked by people but didn’t think he was particularly likeable. So, he would criticize and put others down as a pre-emptive strike. This way he built himself up, rather than potentially be rejected.

It was a bad strategy dating back to his school days, when he was teased and bullied for being a nerd. He used his intellect as a weapon, against the brawn of other pupils. In adulthood, it helped him manage his poor self-image but ended up alienating him to others.

At least by being nasty before anyone else had a chance to be, Phil avoided being rejected for “who” he was—in his mind, anyway. Phil’s behavior did more than cause relationship problems. It was affecting his career progress. Despite his seniority at work, he was passed over for leadership roles, prompting him to be even more defensive.

Phil also admitted to having problems at home with his wife and children. Initially his wife accepted his behavior as a quirk, because Phil had other redeeming features. But, once their children got old enough and Phil started doing the behavior to them, his wife would go to their defense and it would carry into Phil and her relationship.

Do you use your intellect and subject matter expertise as a tool to put others down? Do you sometimes use stalling tactics and bureaucracy to resist people who may be in a superior position, such as customers and senior managers? Can you empathize?

The Emotional Judo® Mats were the most impactful learning tool for Phil. He had never considered that there was a positive way to be less-significant. To him, from his time being teased and ostracized at school, being less-significant was associated with pain. That’s because he experienced it on the UNINVITED mat, a position where people will experience disempowerment in relationships. As a result, skills that allowed Phil to feel positive whilst holding a less significant position in relationships, were key to him turning a corner.

Phil loved the concept of EASE, a four-step process that helps manage conflict, where the first step is empathizing with the other party’s situation or view. But given his well-worn habits, empathy (one of the steps) did not come easily to him. Phil was so used to defending or striking first with sarcasm and ridicule. So, he really needed to practice and think about empathy and sincerely want to see the other person’s viewpoint.

In the end, he became quite good at deploying EASE. He grew adept at shifting to the positive side of the Emotional Judo® Mats. As a result, his relationship with his wife and children grew for the better, and he became happier and more confident. He also saw benefits in the workplace. He gained a Team Leadership role.

He still had some bristly bits, but overall, he was a changed man. And he built more mutually respectful relationships because he was more respectful himself.

You can get Emotional Judo®: Communication Skills to Handle Difficult Conversations and Boost Emotional Intelligence on Amazon (you don’t need a kindle to read it.)