30 May The Social Media Backstab 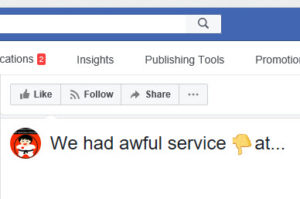 In this age of social media, it is so important how you attend to customers and handle their issues. For all you know, I could be a mystery shopper rating you on your prowess. At the very least, I could simply take my business elsewhere, but more importantly, you don’t know how connected I am on Facebook, Twitter or LinkedIn or what I do, or whom I speak to, for a living.

I stayed at a motel in a large NSW Country town on Sunday night because I was attending a funeral on Monday. The region can get rather cold, and being a few days away from winter, it was quite chilly.

I shared a room with my octogenarian mother and septuagenarian uncle who had been briefed on the room by the owner. I had flown in from another state and arrived separately.

The motel was clean and adequate but all night we were kept awake by a noise that went off every five minutes; a deep, sustained sound, similar to a pool pump. I tried to wake the owner at 1 am to see if we could switch rooms because the three of us in the room could not sleep.

The next morning, after three and a half hours of broken sleep, I spoke to the owner about the issue.

Given that I teach communication skills, I understand the importance of the way you broach difficult conversations. I used some Emotional Judo® tools to get the proprietor on side and then told him of our experience. Instantly, on learning of the issue, he bristled and denied there was a problem; it must have been outside the hotel. He did not apologise for our inconvenience or show empathy at our lack of sleep. At this point, in my old ways of dealing with such situations, I would have been peeved at that and reacted in a way that had us doing emotional karate and butting heads. Instead I acknowledged it could have been outside, it did not seem likely, and I invited him back to the room to listen.

It turns out that it was the central heating making the noise. He demonstrated to me in a patronising way, as if to say, all you had to do is turn this switch off. He washed his hands of responsibility by saying that he had shown this switch to my mother and uncle. I again did Emotional Judo® to acknowledge that he may have shown them the switch and also that it was a simple fix. I also asked whether he had alerted them to the noise and whether he thought it was acceptable to have such noisy central heating in a town renowned for its low temperatures. He then countered with one of the seven sneaky tricks in difficult conversations – a shift of context.

Sometimes, Emotional Judo® tactics will have people move quickly to collaboration. Other times people are stubborn to move from their karate tactics and it takes longer.

At this point I had to choose, whether to continue with my Emotional Judo® skills for some resolution or spend my time on something more important. As I was tired, and we had to get to the funeral, I decided to drop the issue.

It is at this time most proprietors would think the matter is over. They do not think of the longer-term implications of their behaviour and wonder why they have a decrease in patronage. In this country town, there is competition and this business can do with help.

I am not doing that, nor am I mentioning the name of the town or motel in this blog. My uncle, on the other hand, will give honest, poor feedback about the noise and lack of care in dealing with it, on the booking site. This will lower their star rating, which may dissuade future custom.

How are your staff dealing with difficult conversations? Are they cementing the customers and clients to the organisation or potentially alienating them?

Are your managers doing the same with their staff?

Prevention is better than cure.